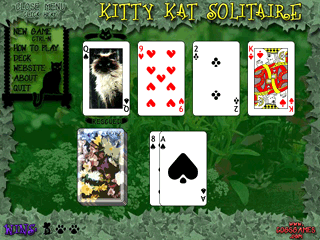 How to play
Setup: A standard deck of 52 cards is used. The deck is shuffled and the top 4 cards are flipped over to form 4 foundations. If any fondation has a queen, the queen is shuffled back into the deck and a new card is dealt until no queens are showing.

The object of the game is to rescue all 4 kitty queens by moving each of them onto a foundation. Cards from the deck are flipped 3 at a time and the top card may be played onto any foundation. If that card is played, the card underneath may be played, etc. When all card from the deck have been flipped, the cards are turned over and played again as many time as the player desires.

A card can be moved onto a foundation if it is a number higher or lower and the opposite color OR a card of the same value may also be played. Players may roll over from king to ace and vice-versa. Foundation cards may be moved to other foundations. If a foundation becomes empty, the top card from the deck if flipped to fill the vacancy.

Once a queen is moved onto a foundation, that foundation is locked and may no longer have cards played on it. Kitty Kat Soliatire relies more on strategy than luck. Refer to the in-game help for play tips.